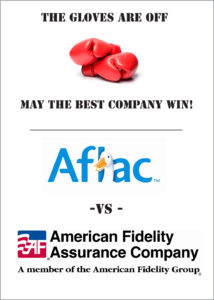 When choosing insurance providers, it is always best to do some simple, yet in depth, comparison of the companies between which you are choosing. In this instance, the insurance providers we will be comparing are Aflac and American Fidelity Assurance Company.

Compare insurance quotes for FREE by entering your ZIP code into our FREE quote comparison tool at the top of the page!

From 1979 through 1997, the Aflac company purchased and held several television stations. These stations were ultimately sold to the Raycom broadcasting company in 1997.

Aflac initiated over 6000 insurance policies in its first year in business, and Aflac was one of the first companies to offer cancer insurance policies. In 1964, the company directed sales of policies to the employment marketplace. Sponsored by and in cooperation with various employers, Aflac was able to fund polices via payroll deductions.

In 2003, 98% of all premiums paid to Aflac policies were deducted from employees’ paychecks. The company became a leader in the payroll deduction approach to premium payment. By 2009 Aflac’s assets were 84 billion dollars with 60 million people covered with polices.

Aflac operates both in the United States and Japan, and has it’s corporate headquarters and main offices in an 18-story, just east of downtown Columbus. The Aflac Building is the tallest building in the city of Columbus.

Avoid the hassle of searching around for the best insurance prices! Use our FREE quote comparison tool by entering your ZIP code at the top of the page!

A director of Aflac conceived of the acronym name of “Aflac” while eating his lunch in New York’s Central Park. The director found himself muttering the acronym, which, to him, was a sound that resembled the quacking of a duck.

The director’s idea was to use a duck for promoting the company in various marketing venues. The famous Aflac Duck is now utilized in numerous television commercials and online video ads.

The Aflac Duck television ads originally began airing in 1999, and the duck has become an increasingly popular symbol of the company over the past several years.

Until recently, Gilbert Godfried was the voice of the famous Aflac Duck. The TV commercials are created and produced by the Kaplan Thaler Group, a popular advertising firm in New York City.

State of New York insurance laws mandate that cancer policies pay back a minimum 82% and other types of policies pay back a minimum of 75%. Aflac’s investment of $170,000 in lobbyists and campaigns to change the law encouraged the lawmakers in New York to overturn the ban to allow policy holders to purchase lower deductible cancer insurance, with lower requirements for payback dollars.

Aflac, in 2001, promoted their first accident policy in the country of Japan. This promotion obtained accolades for the company from the Wall Street Journal as one of the top ten of the most effective marketing campaigns of the year.

American Fidelity Assurance company was given an “A+” rating A.M. Best for sales in 2007. The company was ranked as a Fortune 100 company in 2009, and awarded the accolade as being on the of the “Top 100 Companies to Work For” that year.

Aflac and American Fidelity Assurance both offer supplemental insurance policies that cover expenses not covered by standard health insurance. However, Aflac is, by far, most well known for this type of coverage. Both companies offer life insurance, hospital indemnity, long term care, and cancer policies.

Aflac is clearly the most well-known of the two insurance providers, with their successful marketing campaigns. Aflac has very effectively educated the public with regards to the benefits of owning supplemental insurance policies.

Compare insurance providers now and start saving money by entering your ZIP code into our FREE quote comparison tool at the bottom of the page!